For some reason, as a society we’ve decided one of the greatest threats to our day is being tired. If we aren’t experiencing mass amounts of anxiety and fear of failure throughout the day, well then we’re probably not being productive enough.

We’re convinced our bodies and brains are ill-equipped, unable to make it through the pressures of the day. So we’ve turned caffeine into our nation’s favorite drug.

The internet scientists say “400mg” per day, is probably the safest amount of caffeine to consume. Yet everyday over half of Americans are consuming more than that. That’s far more caffeine math then we’re about to figure out.

There’s that moment when the sweat hits your brow, the jitters start working you real hard. You have a headache, followed by your afternoon mood swing with just the right amount of pissiness and frustration.

We’re just throwing this out there, but maybe our nation’s horrible understanding of what true “work-life balance” is, doesn’t fair well with the original methods and protocols of caffeine and coffee consumption.

Coffee by itself, is an amazing thing with a ton of health benefits! Believe it or not, coffee is a huge source of antioxidants, can alleviate certain types of headaches, and may even lower your risk for diseases like Parkinsons and Dementia. There’s something like 75 actual known benefits in that little bean.

So while our amped up caffeinated society isn’t changing anytime soon, maybe coffee can. What if, instead of contributing to our relentless cycle of anxiety and pressure, coffee could bring a sense of zen? Imagine your morning cup of coffee being more than the start of another stress-filled busy day.

For our giveaway this week, we’ve partnered with Jordan Ohara, veteran and founder of Windansea Coffee. 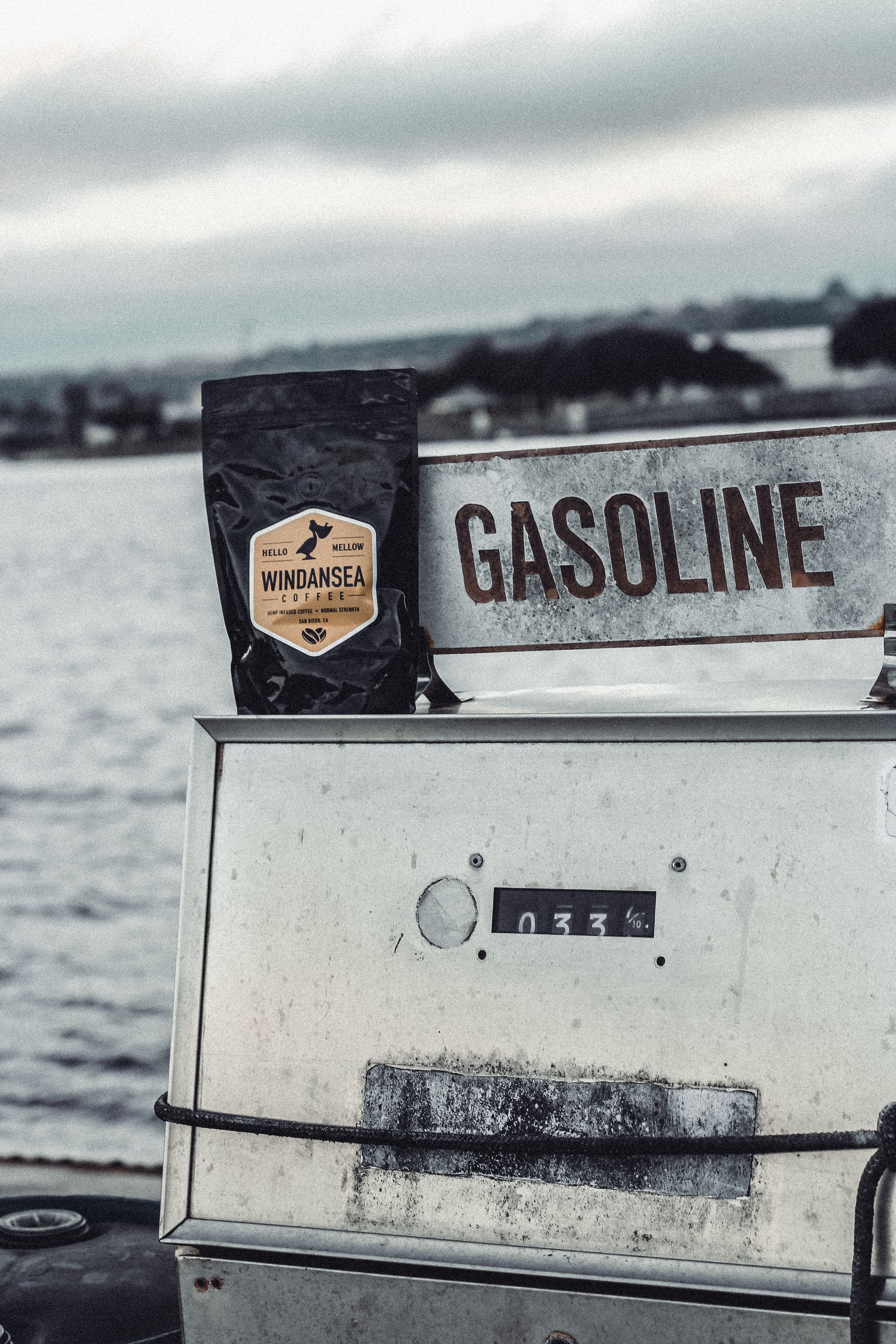 In 2015, while serving in the Navy, Ohara suffered a career-ending accident during a training exercise. The accident left him with a debilitating back injury. After spending two years exhausting every form of traditional rehab made available by the military, back surgery seemed to be the only remaining recourse.

Upon learning the life-altering risks associated with the surgery, Ohara opted out. Instead, he spent the next year on medications and injections; their side effects eventually taking a toll on both his body and his mind.

Unwilling to live the rest of his life as a disabled veteran, Ohara forged his own path of healing. A new war where his opponent was no longer a group from foreign lands, but his quality of life.

Ohara soon got involved with therapeutic yoga, Wounded Warrior Surf Clinic, and natural plant based alternatives, such as hemp oil and turmeric. Eventually, he began to gain his life back. Each day he worked through the pain by weight lifting, surfing, running, yoga, and rock climbing; and managing his medication’s side effects by taking CBD.

It was in those moments of zen – drinking his coffee, taking CBD, enjoying the healing power he experienced out in the waves, that he found the inspiration for starting his company.

When I learned that every day, 22 veterans commit suicide, I decided it was time to export my happy place to others in need. Windansea coffee is my attempt to bring that feeling to the world.

The name comes from Windansea Beach. It’s one of the most iconic surf spots in Southern California. It was also one of the first waves I rode on a big day that really scared the piss out of me.

I named our coffee in its namesake because I think it’s important to remember to do shit that’s scary everyday.

Take a chance.  Push yourself.  Be uncomfortable.

It bothered me, going through rehab, seeing how many injured service members were becoming disabled veterans.

I think Americans are dependent on too many pharmaceutical products, especially those living with chronic pain and injuries – like veterans, athletes, military, first responders.

It’s limiting their ability to heal and push themselves. I truly believe there are natural alternatives out there, like CBD, that can be really beneficial.

So what is CBD? Cannabidiol – is a phytocannabinoid. It is one of some 113 identified cannabinoids in cannabis plants and accounts for up to 40% of the plant’s extract. CBD is non-psychoactive which means it’s not going to get you high. It’s because of the way it differs from the more commonly known THC, that its popularity in healing and dietary products is increasing.

CBD is something still not talked about enough. I was taking CBD in the mornings but having to chase it with my coffee, cuz the oil tasted like mashed butthole.

I immediately noticed that I wasn’t getting jittery and clammy like I usually did after drinking my coffee. So I thought it would be way better if you could skip a step just have to remember to drink coffee, and not taste the oil.

With our coffee, there’s no jitters, its benefits are freaking amazing, and who doesn’t like coffee? It makes you poop!

I experimented with finding a way to achieve 3 goals:

What we have today is the result of many months of product development, using the highest quality ingredients, and refining the process to create the best CBD coffee on the market.

Windansea is truly disrupting our coffee consumption habits. Taking our love of caffeine and combining it with the potential benefits of natural healing, into something people can consume on a daily basis.

Within a few sips, you’re immediately transported to a place of balance and calm; without sacrificing that “energy jolt”we seem to require from our morning cup of coffee.

As far as what lessons of strength Jordan Ohara learned from his time serving, and the way he lives his life as a man, well it goes something like this:

The military taught me a few things  – Don’t be late. Suffer in silence. Pack light. That sand is the F*cking worst. And how to fold my underwear.

I don’t want to shit on millenials, because I am one haha. So I’ll just say that I think men now are more likely to express themselves in more ways emotionally, which is probably healthy. I think men from older generations were more tight lipped and bottled up with their traumas.

Especially in warrior cultures like the military, you are expected to suck it up and keep moving forward. Which is generally good advice, because people whine too much. But it’s also important to process your traumas and know when to open up.

I do think the biggest challenge for the generation of young men growing up today, is remembering to learn all the manly shit that men have been doing for thousands of years.

So when everything eventually becomes 1 amazon delivery away, I think young men will have to be motivated enough to learn that stuff on their own.

You should know how to sleep outside, clean a fish, light a fire, shoot a gun, be dependable, drive stick shift, tie a tie, smoke a cigar, dig a hole, chop wood, clean a garage, carve a turkey. Etc.