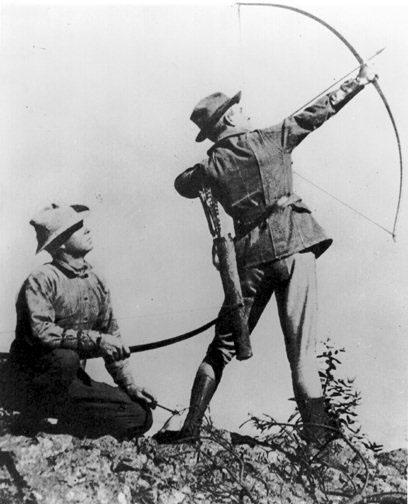 One of the oldest forms of hunting and warfare, the art of Archery most likely got its start during the stone age at the beginning of mankind’s history. A  time when men were hunters and gatherers. Manly men using their bodies the way they were intended to be used.

Our first glimpse into the mighty fury of bows and arrows are historical relics. Images of Ancient Egyptian warriors riding gold chariots, with what appear to be  compound bows. Archery was also favored in the Greco-Roman period by the ever-conquering massive Roman army.

In Japan the practice was once known as

The archery of today is less art, more recreational sport. Don’t get it wrong, we’re all for sports, especially ones that allow us to shoot at targets. We’re just bigger fans of the spirit and essence of something that was once sacred, before it was depleted by society. Like a man’s masculinity.

A man can actually learn a lot from the mystical flight of the arrow and its ancient virtues, all of which are applicable to everyday life. Its unique demands require intense focus, instinctual awareness, and discipline in order to become a master at it.

To reach a level of mastery, you have to abandon the ego. In archery that means placing the thought of hitting the target out of your mind. Being the best you can be with a clear mind, discipline, and good intentions is the true target in the world of archery.

In life, when the ego goes unchecked, it’s prevents a man from learning and being humble. Through hard work and discipline you get stronger and become toned specifically for the task.

What makes a good Archer?

What makes someone excellent in life?

The bow teaches how to properly wait, instilling the patience it takes to know the perfect time, and the perfect place, to strike the target.

Any old school bowman will probably tell you the same thing. The mantra is:

Byron Ferguson, one of the world’s top archers takes the “aim small, miss small” mantra to heart. He’s been known to shoot golf balls, dimes, and aspirin tablets mid air. He does so with feel and instinct.

Just like throwing a baseball, simply look at the spot you want to hit, bring the bow back, when your fingers touch the established anchor point, you release the arrow immediately.

It speaks to the focus and precision it takes for the path of the arrow to travel. A path forged from a deep instinctual nature.

You’re not becoming “one with the arrow,” rather being the path the arrow should travel upon. In life we must forge our own paths with intention and focus, becoming  “the way of the bow.”

It would seem you master archery, you end up mastering life.